Diabetes is one of the largest global health emergencies of the 21st century. Each year more and more people live with this condition, which can result in lifechanging complications (10). There are several forms of diabetes, however most common are: type 1 and type 2 diabetes. Type 2 is more frequent, represents 90-95% of all diabetic cases in humans and is characterized by peripheral insulin resistance and relative insulin deficiency due to an inability of B-cells to compensate properly (1). In veterinary medicine both types of diabetes are encountered, especially in small animals. Dogs develop type 1 and cats both types of diabetes, but type 2 is more frequently. In order to prevent or treat diabetes, new drugs and strategies have been developed using different diabetic experimental models (22).

The animals chosen for these studies are rats and mice because they are easier to work with, far less expensive and sensitive to the streptozotocin effects (11). There are two categories of rodent models used for T2D research: genetic (spontaneously) and experimentally-induced (non-spontaneously), the latter models are preferred to the genetically induced models due to their comparatively lower cost, wider availability and much easier diabetes induction (9, 11). STZ is one of the most used chemical to induce diabetes in experimental models (12, 13). However, its cytotoxic effects on B-cells are devastating and is resembling the type 1 diabetes pathology in humans.

One potentially useful STZ-NA model of diabetes type 2 have been developed. This model was established by Masiello et al (1998) mechanism of STZ-NA is based on the ability of nicotinamide to exert a partial protection against the β-cytotoxic effect of streptozotocin (16). Thus, some of the pancreatic β-cells are remaining unharmed and capable of secreting the insulin (15).

Streptozotocin is a diabetogenic compound, produced by Streptomyces achromogenes which exhibits a broad spectrum of antibacterial properties. It is toxic to the insulin producing B-cells of pancreatic islets resulting in hyperglycemia (7). It is used in medicine for treating certain cancers of the Langerhans islets and used in experimental research to produce type 1 and 2 diabetes in animal models (6). Several species, including the mouse, rat and monkey, are sensitive to STZ effects (23). The mechanism of action that STZ exerts on cells has been described elsewhere (14). Nicotinamide is the amide form of vitamin B3 (niacin) that functions as a precursor to nicotinamide adenine dinucleotide (NAD+) (4).

This model of type 2 diabetes has the following features: stable moderate non-fasting hyperglycaemia and the reduction of B-cells is about 40% (15). This model, is reported to be a suitable model for biochemical and pharmacological researches testing new potential antidiabetic drugs (9, 22).

It should be underlined that the effects induced in rats by STZ and NA vary depending on the doses of these two compounds, animal strain, age , gender and the time of NA administration in relation to the STZ administration (22). Different authors use different doses of STZ/NA and therefore no dosage will be recommended here.

Acclimatization of the rats should be done for at least 1 week prior to the start of the experiment. House 2-5 rats per cage at 20-26°C and 40-70% humidity, with a 12 hours light-dark cycle (18). Allow the rats to have free access to food and water. It is important to have the initial blood glucose concentration before the induction of diabetes. One day before the experiment, measure blood glucose for all rats. The technique of blood sampling will be discussed later.

The National Institutes of Health (NIH) and Animal Models of Diabetic Complications Consortium (AMDCC) suggested that mice should be fasted for at least 4-6 hours prior to STZ administration. Similarly, the accepted rat fasting time is between 6 to 8 hours (8). Some studies suggest that STZ absorption is the same in fasted or fed rats. The rationale for fasting rats before administering STZ is because glucose may compete with STZ for uptake into B-cells via low affinity GLUT2 trans-porters during post prandial periods (5).

On experimental day (day 0), fast all rats for 6 hours (from 8:00 to 14:00) before the injection of STZ. Remove the food from the feeders, but provide water as normal. Leave a clear note about this.During the fasting period (8:00–14:00) weight all the rats. Calculation of STZ/NA doses/volume required for administration are listed in table 1. Using an insulin syringe (1ml), inject nicotinamide i.p. The nicotinamide administration must be made 15 minutes before STZ injection (8, 16). During this period, the doses for STZ can be reviewed again and in the last 5 minutes STZ solution preparation should be started. The STZ should be administered i.p., 15 minutes after NA injection, but within 10-15 minutes after STZ solution is prepared. For this reason it's indicated not to inject more than 10 rats per tube. STZ solution should be prepared just before use, since the product is not stable. It degrades after 15 minutes in citrate buffer solution.

It is also light-sensitive and is recommended to be covered with aluminium foil or to be kept on ice in thermo isolating bag (3). Return the animals to their cages. Provide normal food and monitor the animals in the first few hours. Hypoglycaemia can be expected to occur in the first 24 after STZ injection and for that reason 10% sucrose should be given until next day. Measure blood glucose (BG) concentration after 72 hours or 7 days after NA/STZ injections. It's indicated to make also a clinical exam daily to see the progression of diabetes and its complications. 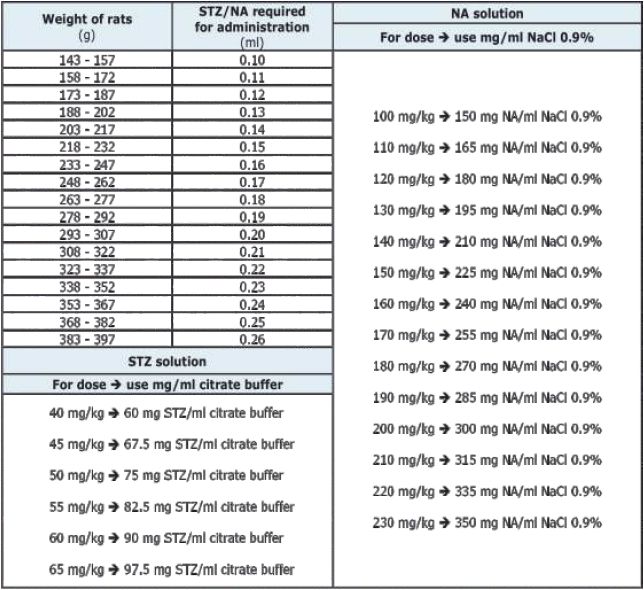 NA solution. Weight NA desired dose using the sensitive scale (Table 1) and put it in Eppendorf tube. Add 1-2 ml of NaCl 0.9% and mix it together using a vortex machine. NA solution must be prepared just before use.

STZ solution. Weight STZ desired dose using the sensitive scale (Table 1) and put it in Eppendorf tubes. Add 1-2 ml of sodium citrate buffer (pH 4.5) and mix it together using a vortex machine. STZ solution must be prepared just before use and administered within 10-15 minutes. It should be covered with aluminium foil to protect it from light. Streptozotocin is cytotoxic to both humans and animals, it can be handled only by authorized persons under special conditions (biosafety room) and should wear protective equipment (e.g., mask, and gloves) (17).

Sucrose 10%. Dissolve 10 g of sugar in 100 ml of normal tap water. Put it in rodent bottles for the next 24 hours to avoid hypoglycaemia induced deaths.

Hyperglycaemia represents the primary indicator for the successful induction of diabetes using STZ animal models. There is not a certain day when BG levels must be measured after diabetes induction, but most authors consider day 3 and 7 the most appropriate. Because there is a large inter-laboratory variation between blood glucose concentrations there is no standardized hyperglycaemia threshold for rats (9).

However, there are some key points of general agreement: BG should be measured by the same person, at the same hour. It's important to avoid stress induced hyperglycaemia and to have in mind that glucose levels are fluctuating throughout the day. Never use fasting and non-fasting states in the same study. Hyperglycaemia is defined as a blood glucose level which is significantly higher in diabetic group compared to normal group. Despite all of this, animals with blood glucose concentrations less than 150 mg/dl (8.3 mmol/L) should be rule out from the study (8).

Restrain rat using a towel and leave the end of the tail exposed. In this manner the rat is not struggling so much and the stress induced by handling is diminished. Prepare a sterile lancet or a sharp blade. Make a small incision (or use lancing device) at the tip of the exposed tail. A small drop of blood should appear. Insert test strip to glucometer. Place the drop of blood on the active region of the glucose test strip. Wait a few seconds for glucometer to analyse the blood sample.

The results obtained could be expressed on mg/dl or mmol/L depending on glucometer type/function.

In our experience, 15 from 22 rats (68%) developed hyperglycaemias (>150 mg/dl) 7 days after STZ/NA diabetes induction. Results of non-fasting blood glucose are presented in Fig. 1.

Induction of diabetes with streptozotocin and nicotinamide leads to a partial destruction of the pancreatic β cells, resulting in a lower secretion of insulin and therefore hyperglycaemia. Time considerations are crucial (e.g., time between administration of NA and STZ). STZ/NA animal model represent an easy, fast and cheap way to induce type 2 diabetes comparative with other protocols.

Stable hyperglycaemia is a characteristic of this model, but only in non-fasting state.

This model is suitable for testing new potential anti-diabetic agents and for studies of diabetic complications. Another advantage is that the hyperglycaemia is not so severe and the animals can live without insulin administration. It seems to be closer to human pathogenesis, thus representing an accessible and favourable alternative of diabetes induction.