Milk whey (also called lactoserum) has traditionally been considered a by-product of cheese-making and casein manufacture; more recently, however, the milk whey has been reconsidered as an excellent source of bioactive proteins, lactose, vitamins, minerals and lipids, as opposed to a simple waste material1. Various types of milk whey have been described, with relatively similar chemical compositions but varying widely in terms of preparation procedures in so far as such factors are involved as pretreatment of the cheese milk (heating, centrifugation, cultures used, use of membrane processes, etc.) and the whey handling and pretreatment processes (pasteurisation, pre concentration, recovery of casein fines)2,3. The cheese whey and probiotic cultures use in the preparation of dairy beverages has been extremely attractive by food biotechnology industry4. A new option to add further value to dairy beverages can be supplementation with probiotic bacteria and prebiotic ingredients5 with potential health benefits. The use of whey in the production of dairy beverages could be an alternative for dairy industries6.

In the present study, a commercial formula of milk whey (lactoserum namely Zonar) obtained from cow milk is characterised regarding physicochemical composition. This preparation is intended to use in curative purposes, at nutritional therapies, or as an adjuvant in the treatment of various diseases such as obesity or type II diabetes. Various added ingredients (ginger, cacao powder, honey, colloidal silver solution) have been described in whey for obtaining new dairy beverage with wider use in various diseases. Beverages with bioactive compounds (from extracts of cocoa, Hibiscus flower, ginger) are consumed for their food value and the health benefit for consumers7. Ginger is a potential herbal alternative in the management of digestive disorders, migraines, painful arthritis, and motion sickness8. Cocoa powder contains flavonoids that help prevent systemic inflammation, improves blood flow and helps lower blood pressure. Honey can serve as raw material/substrate for the production of kefir-like beverages with functional and flavouring properties as well as high antioxidant activity, low lactose content and potential probiotic composition9. Also, it has been seen that if silver nanoparticles (AgNps) are directly added into milk the microbial growth decreased10.

The purpose of this study is to investigate the physicochemical characteristics of some new dairy beverages based on lactoserum Zonar and of its three variants with added ingredients such as ginger, honey, cocoa powder and colloidal silver solution, which were recently launched on the Romanian market.

Measurement of pH and titratable acidity (TA, Thorner degrees). The pH was determined using a Hanna Instrument pH 211 Microprocessor pH Meter; the overall acidity of samples was determined by an analytical method in according STAS 6353-75, using the following equation:

where V is the volume of 0.1 N NaOH solution used for titrationin cm3, and 10 – the sample volume taken in the analysis in cm3.

Determination of water content and total dry matter. A ceramic capsule was dried in an oven at 103 ± 2°C for at least 1 h. After cooling in a desiccator, the capsule was weighed and 10 ml of milk/lactoserum sample were added. The capsule was weighed again, then dried in the oven at 103 ± 2° C for 4–5 h and, after cooling in a desiccator, weighed again. The drying is repeated, until a constant mass was reached. The water content (Water, %) and total solid content (T.S., %) are calculated as follows:

Determination of sodium chloride content. Aliquots of 25 g of each sample were analysed, after shaking in order to ensure homogeneity. Determination was done by precipitation11 with a AgNO3 solution in the presence of potassium chromate as indicator until the colour turned red-brick. The sodium chloride (NaCl, %) content is calculated using the following equation:

HPLC sample preparation. 1 ml of milk-serum sample was diluted with 4 ml water. To 1 ml of this diluted solution 4 ml of 70% of acetonitrile were added, leading to protein precipitation; the solution was passed through a 0.45 μm filter and injected in the HPLC system. A 20.15 mg ml–1 stock solution of lactose was prepared in ultrapure water. The lactose calibration curve includes 5 concentration points between 20.15 and 1.0075 mg ml–1.

Equipment and method. A HPLC Jasco Chromatograph (Japan) with a refractive index detector was employed. The data were processed with the ChromPass software. Separation was carried out on a CARBOSep column at 70ºC column temperature. The mobile phase was a Milipore ultrapure water; the flow rate was 0.5 ml min–1.

Determination of total proteins by Electrophoresis

Preparation of Bradford reagent. 100 mg Coomassie Brilliant Blue G-250 were dissolved in 50 ml 95% ethanol and 100 ml 85% (w/v) phosphoric acid was added under continuous stirring. The resulting solution was diluted to a final volume of 1 l with final concentration of the reagent: 0.01% (w/v) Coomassie Brilliant Blue G-250, 4.7% (w/v) ethanol, and 8.5% (w/v) phosphoric acid12. Bovine serum albumin was employed for the calibration curve. The absorbance was monitored at 595 nm, using a Perkin Elmer Spectrophotometer. For polyacrylamide gel electrophoresis under denaturing conditions (15% SDS-PAGE), 10 μl of a 20 μg ml–1 final concentration of denatured protein sample were loaded on the gel.

Sample preparation. Aliquots of 5 g of pre-mixed samples were analysed, in triplicates. The crucibles with sample were placed in a thermostatic oven at 100°C to evaporate the water; after drying, they were placed in a thermostated electric furnace, raising the temperature gradually to a 550°C temperature where it was maintained for 7 h. After the samples were removed from the furnace, they were treated with a mixture of concentrated nitric acid (65% HNO3) and hydrogen peroxide (30% H2O2) in 1: 0.6 ratio of successively added to each sample. After addition of HNO3, the sample crucibles were placed on a sand bath to evaporate gradually. After cooling, H2O2 was added to the samples, and heating was continued on the sand bath until the samples had dried. The operation was repeated two more times.

The serum phase represents the watery portion of milk, without fat globules and casein micelles. The whey proteins are located in solution in the serum phase of milk along with minor proteins and enzymes, including lacto peroxidase, lacto transferrin, lysozyme, glycoprotein, serum transferrin, and degradation products derived from casein. The whey proteins and caseins are distinguishable from each other by their physical and chemical characteristics such as: the whey proteins present hydrophobic and hydrophilic regions while the casein presents strong hydrophobic regions; the whey proteins are stable in mild acidic environmental while the caseins precipitate in acidic conditions and insoluble at pH 4.6. The whey proteins have water-binding capacity, increases with denaturation of the protein, are soluble at all pH levels; insoluble at pH 5, if they are denatured. They have a low viscosity for native protein and higher if denatured. The gelation occurs at 70°C (158°F) or higher and is influenced by pH and salts13.

Figure 1 shows SDS-PAGE data on Zonar, as compared to bovine milk and to a whey derived there from by a classical procedure. The two dominant proteins are, in line with previous studies on other whey preparations14,15, α-lactalbumin (14 kDa) and β-lactoglobulin (18 kDa). This profile is similar to the one displayed by a reference whey sample prepared in the laboratory by simple chemical treatment, and attributable as "weet whey"15. 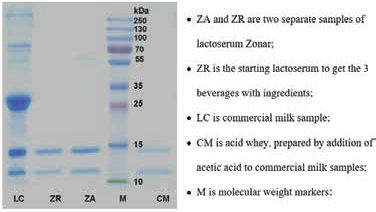 Fig. 1 SDS-PAGE gel of two samples of lactoserum Zonar compared to commercial milk and to whey derived therefrom by simple precipitation with acid

Lactose is the main component of whey, constitutes about 4.4–4.9% of the whey ‘as is’ (almost 75% of the dry matter) depending on the whey type16. Lactose content was obtained by HPLC-RI (refractive index detection) method. The calibration curve (linear range 20.15–1.0075 μg ml–1) has the regression equation Y = 0.0065X + 1.74 and regression coefficient of 0.9989. The limits of detection (LOD) and quantification (LOQ) were 13.7 and 41.1 μg ml–1, respectively. In Fig. 2 are shown the HPLC-RI chromatograms of lactose standard and Zonar sample. 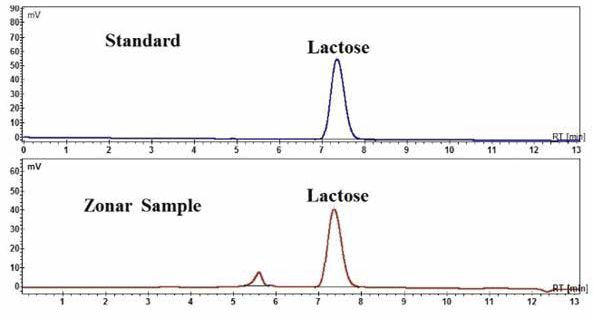 In order to achieve a stable formulation starting from the basic properties of the whey and in order to improve them, an attempt was made to reduce the salt content. Also, the mineral substances in the concentrate, especially the calcium salts, increase the flocculation of serum proteins from the concentrate on heating, while the citrate and phosphate anions protect Ca2+,increasing the thermal stability of the proteins to a neutral pH.

The mineral composition differs most with the pH and lactic acid content, between the different types of whey. At pH 6.0 or higher, much of the calcium milk is retained in the cheese. The high content of calcium in the whey seems to be the main reason for variations in the physicochemical properties of whey, including its substantially lower stability, compared to that of sweet whey2. Due to the fact that the composition of demineralised whey resembles much of that of breast milk, about 65% of the total amount of low-whey mineral is used for the manufacture of infant formulas. Also, demineralised sweet whey (25–65% demineralisation) can be used in a healthy diet, being recommended for weight loss and for its curative and palliative effects in various types of degenerative chronic diseases, such as diabetes. Demineralised whey products have also been used in a range of dairy beverages2. 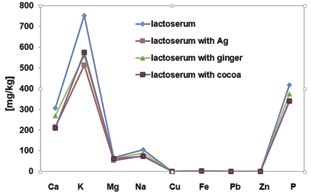 The new dairy beverages based on lactoserum found on the Romanian market have similar physicochemical characteristics to sweet whey. But instead, they have a low protein and mineral content and a moderate quantity of lactose, which recommend them for curative and palliative purposes in medical fields such as obesity, diabetes mellitus type II or kidney diseases. In order to ensure their bioactive properties, more chemical and biological investigations are needed.