Polylactic acid (PLA) is one of the most investigated biomaterial, being synthesized for the first time by Carothers in 1932 (8). Since then, PLA is produced in large scale all over the globe, its use in medicine being approved by the FDA in 1970 (28). The lactic acid, the PLA substrate is extracted from natural sources, such as feed stock, sugarcane, starch and nowadays from the milk whey (13). Extracting lactic acid from whey and then converting it into polylactic polymer is one of the newly developed strategies for the PLA synthesis (13). Biocompatibility is the property that recommends the PLA as one of the most utilized biopolymer in biomedicine. Due to its physical and mechanical properties, PLA is used in mixtures with other polymers, copolymers, composites or blends (28). The potential applications of the PLA in biomedical field include tissue engineering, wound management, drugs delivery and orthopedics (6). Also, PLA is used to obtain a wide range of products in biomedical fields previously mentioned, such as degradable sutures, drug releasing systems, nano-particles, porous scaffolds, plates, screws for cranio-maxillofacial bone, tacks and pins for ligaments, and nowadays for obtaining soft-tissue implants (6).

The aim of this review paper is to discuss PLAs application in different biomedical fields in order to highlight the PLAs utility as a biomaterial, as well as to enhance the use of composite biomaterials in bone regeneration.

Advantages and disadvantages of PLA usage

PLA has 4 advantages in comparison with other biomaterials, which are represented by the renewability, biocompatibility, processability and energy saving (28). Biocompatibility is the most attractive property of PLA with respect to its applications within the biomedical fields. PLA is not toxic in vivo, nor has any carcinogenic effects on the tissues (16). Polylactic polymers degradation occurs by hydrolysis in living organisms tissues, and by thermal activation in nature (16). The products resulting during the PLA degradation are the water and CO , which are non-toxic and further they are 2 metabolized by cells (Fig. 1).

Fig.1. Illustration of the chemistry reaction during which the cellular PLA biodegradation occurs

While the PLA has numerous beneficial properties, it also has many drawbacks applications in the medical field. These drawbacks consist in poor toughness and fragility, which makes PLA unsuitable for demanding mechanical performance unless it is suitably modified (5). Another negative aspect is that PLA is hydrophobic, leading to low cell affinity with the appearance of an inflammatory response from the living host tissues (6). PLA has also a slow degradation rate that depends on its molecular weight and crystallinity. Mostly, high molecular weight PLA has a long in vivo life, and the degradation rate lasts from 12 months to 5 years. Another drawback is the lack of the reactive side chain groups, which makes PLAs surface modification a working challenge.

Biomedical applications of the PLA

The tissue engineering synthesizes the substitutes that mimic the natural cell regeneration process to help the growth of new tissue in vitro or in vivo. At a simplistic level, biological tissues consist of cells, signaling mechanisms and cell matrix. An essential condition common to all types of materials used in tissue engineering, especially for scaffolds, is to ensure good biocompatibility (6). PLA is used in bone regeneration mixed with other co-polymers (PLA-PEG or PLA-p-DPEG), or combined with other biological compounds (such as bone morphogenetic proteins-BMPs) for an enhanced tissue regeneration (16). Saito and Takaota (23) examined the use of PLA combined with BMP, and tested their biological effects on severely demineralized bones. Their researches have revealed the bone morphogenetic properties of the mix, but small quantities of bone matter were formed. This disadvantage was influenced by the molecular mass of PLA and its half-life. The study concluded that there was a need for a PLA with a greater molecular weight. Chang et al. (4) created a porous graft from PLA with high molecular weight and BMPs, which achieved a bone matter regeneration effect within two weeks. Hollinger and Schmitz (24) combined demineralized bone with PLA polymers, using the blend in a study on a rabbit with calvarial defect, over 24 weeks. The results have shown that the implant led to the development of a large quantity of trabecular bone matter, without the presence of an inflammatory reaction. Levy et al. (8) used sheets coated with PLA underneath and above the calvarial defect in order to prevent the prolapse of the soft tissue through the defect, and observed an enhanced regeneration process, compared to the control. Agrawal et al. (1) have developed a porous implant of PLA-PGA with added BMPs, and the implants were used in a study on calvarial defects with great bone matter loss. The results have showed a significant increase in bone matter gain in groups with added implants compared to control groups.

The usage of PLA stents showed lack of inflammatory reaction in the treatment of bladder wall lesions. The advantage of using these stents is that they have degraded in time, while the organ's tissue have regenerated (10). Mixtures between PLA and polytrimetilen carbonate have been tested for prevention of postsurgical adhesions. These biomaterials were used such as films, and proved to be compatible with tissues and non-cytotoxic, preventing postsurgical adhesions (10). 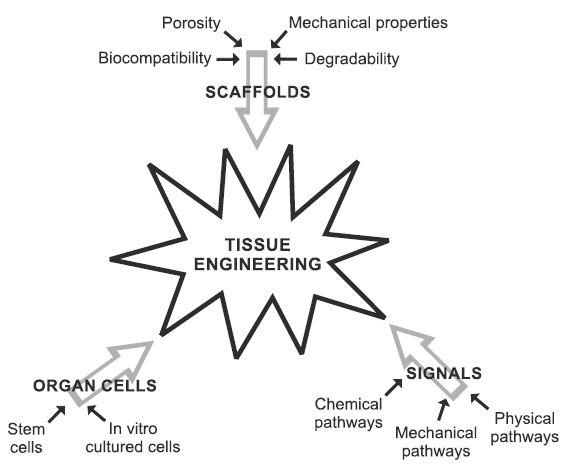 Fig. 2 Required properties and factors important for biomaterials use in the tissue engineering.

The mechanical and accommodation properties of the scaffolds with the host bone tissue must be able to withstand the stress of the daily activity. Tissue engineering technologies are based on a biological triad which involves the successful interaction of 3 components, such as: 1] scaffold that holds the cells to create tissues together in physical form; 2] stem cells that create tissues; and 3] biological signaling molecules, respectively the cellular growth factors (Fig. 2).

Biodegradable polymers are used in orthopedics with the purpose of discarding the 2nd surgical intervention for the removal of the medical devices (6, 8). The most commonly used material in orthopedics is titanium, but in the majority of cases it needs to be removed due to the immense mechanical forces it exercises upon the bones or the affected area. In many cases, secondary rejection reactions of titanium by the body are present in animals, as well as in humans, leading to osteomyelitis, bone necrosis, or substance loss over great areas (20). Polylactic acids are used especially in the fabrication of the plates, screws or cerclage wires (2). These materials are used in regions of the body where there is no need for a large mechanical force or toughness, these regions being the joints of the fore- or hind limbs, palmar or plantar faces, and zygomatic bones. Research is on course in rods and screws used in the fixation of long bone fractures, and it consists in the improvement of the mechanical properties, such as impact force, resistance and bending point of PLAs used in surgical procedures on long bones (28). Mending the articular cartilage represents one of the greatest challenges in orthopedics. Schroeder et al. (25) used a PLA matrix with periosteal grafts in the knee of a rabbit. Athanasiou et al. (2) used implants consisting of PLA-PGA combined with growth factors in osteochondral defects in the knee of a rabbit, in order to test the regeneration effect in the cartilage and surrounding bone.

Polylactic polymers are used as drug delivery systems (28). These were studied for late-release of varied pharmacological molecules. Discharge of drugs enclosed in polymers is achieved through erosion.Ling and Huang (12) studied the discharge time of the PLA nanoparticles combined with the drug paclitaxel in vitro, where the late discharge of the drug was demonstrated over 6 months. Rancan et al. (21) have studied the utility of the PLA nanoparticles loaded with the fluorescent dye, within the trans-epidermal transport of medicinal substances. The study was carried out on human skin, and revealed the capacity of the PLA to migrate in the hair follicles and to release the pharmacological substances at their base (21).

(Table 1). The bone has the capacity of selfregeneration, but because of certain chronic metabolic pathologies, traumas and aging, deficient bone regeneration occurs (11). Current strategies aim for an enhanced bone tissue healing through implantation of some different biomolecules, such as stem cells, biomaterials and combinations of cell and biomaterials, for the enhancement of the healing process (17).

Testing these compounds on animal models bone defect represents the gold standard in translational research. The goal of biomaterials is to repair, support, substitute or regenerate the wounded bone tissue (17). Relatively few orthopedic experimental models on animals exist in bone engineering, but they allow the most relevant and correct clinical evaluation in the testing of biomaterials. To correct deficiencies, several species are used, such as rats, hares, swine or small ruminants, and the defects concern femur, spine, jaw and calvarial bone (11). 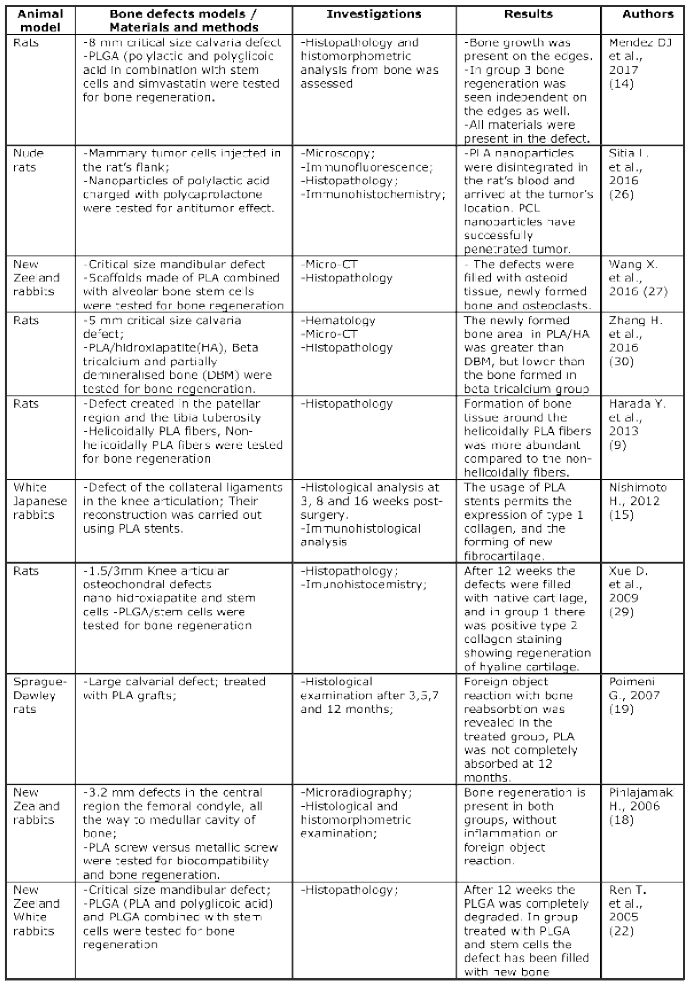 This work was supported by a Grant of the Romanian National Authority for Scientific Research and Innovation, CNCS/CCCDI-UEFISCDI, project number PN-III-P2-2.1-BG-2016-0335, within PNCDI III.